David Matthews, who enjoys an international reputation for his own string quartets, wrote as follows after the premiere of Julian Broughton's String Quartet No.2: Earth and Angels: "I enjoyed the concert and thought your piece was outstanding. It exemplifies your best qualities as a composer, with its singing melodic lines, fine counterpoint and exhilarating rhythms (most people now just don't write real dancing rhythms, as you realize when you hear them). The slow movement is most beautiful [. . .]" (May 2011).

I have worked in most genres. Recent compositions/ performances include Requiem (2020) for soprano and baritone soloists with chorus and thirteen instrumentalists, String Quartet no.3 (2017), Aria for violin and strings (2016), which became (in 2018) a Concerto for violin, timpani and strings with the addition of two new movements, Rain at Midnight, a song cycle for baritone and piano (2015), Sonata for Violin and Piano (2014), whose final movement was encored at the third performance in February 2017, and Symphony in E [Listen/View], commissioned by Horsham Symphony Orchestra with financial assistance from the PRS for Music Foundation and the Ralph Vaughan Williams Trust (2011).

The Long Negation [Listen/View], a setting of a specially-written poem by Peter Abbs, is one of a number of pieces in which contemporary poetry is approached in innovative ways. Here, the text is presented by two performers – one speaks, the other sings, and both are accompanied by a small instrumental ensemble. My own ensemble, ‘Pedlar’s Dream’, gave the premiere in 2011.

However, the same year also saw the composition of Rain at Midnight, for the more familiar combination of baritone and piano.  This cycle, which sets six new poems by Paul Matthews, is sung throughout. Working with words is endlessly fascinating, and has always been an aspect of my work as a composer.

A practising poet, I occasionally set my own poems to music.  However, I usually prefer the challenge and excitement of responding to other people’s work.

If you’d like to become involved in a new music project, for example by commissioning a work, please email me at contact@julianbroughtoncomposer.co.uk 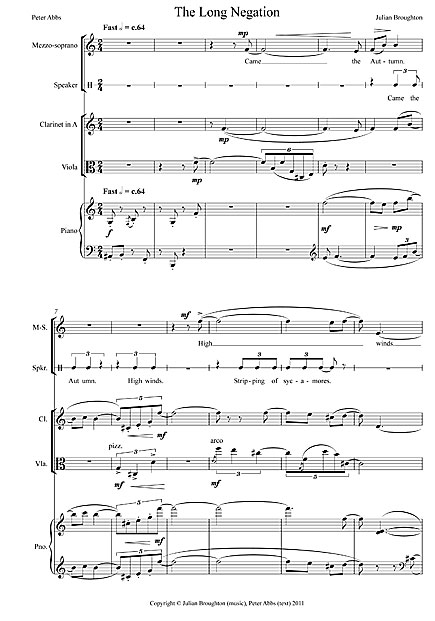 The Oak and the Reed, arranged by the composer for soprano, oboe, clarinet, viola and harp: 2002. Sally Bradshaw, soprano, members of Okeanos (Lincoln Cathedral).

not so fast (String Quartet no.3) First performed June 2009,  members of Musicians of All Saints (Hamsey Old Church, Lewes)